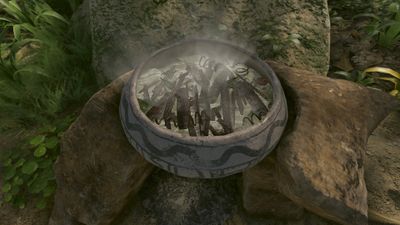 Ayahuasca is a game mechanic that allows the player to progress through the story. Ayahuasca is only available in story-mode.

Ayahuasca is a hallucinogenic brew that is used in the religious rituals and healing ceremonies of the Yabahuaca tribe. It plays a key role in story mode, allowing the player to progress further in to the story and will often unlock access to new locations on the map. The player will learn how to make the ayahuasca brew by finding the burned pages located in a burned backpack at the abandoned tribal village.
A new entry will show in the players notebook detailing how to make and use the ayahuasca brew.

When the player drinks the ayahuasca brew they will be affect by it's hallucinogenic properties. The world will become bright and full of psychedelic colors, and an small native child will be seen and can be heard talking or calling in his native tongue. The player will need to follow the child, who will lead them to a spiritual doorway. When the player enters the doorway they will be shown one of Jake's visions. Once the vision has played, the player will be return to the ritual bowl, which will now be on the floor broken.

To make ayahuasca the player will first need to find and collect one banisteriopsis vine and one psychotria which are to be used as main ingredients.

There are several story items relating to ayahuasca, that can be found in various locations and visions.

For information pertaining specifically to the real-world Ayahuasca, see the relevant Wikipedia article