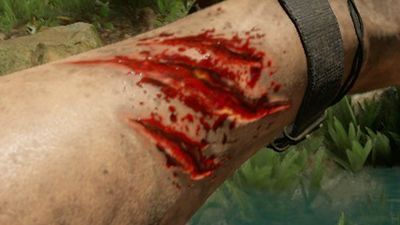 Lacerations are deep irregular tear-like wounds, which will cause the player to bleed. Having a laceration will rapidly drain the players health and if left untreated the wound will quickly become infected. In most cases where the player health was already low before receiving a laceration, it can ultimately lead to death if not treated quickly.

When the player receives a laceration the screen will darken and the health meter will flash red for a second, indicating that a deadly wound has occurred. The inspect icon will also be displayed above the health meter on the left side of the screen.

Lacerations are commonly caused when being attacked by aggressive animals such as the Jaguar and Puma.

The player can sometimes also receive lacerations while in combat or being attacked by natives.

The player will need to inspect their body to find the location of the laceration. Once the laceration has been located, the player can use one of three methods to heal the wound.