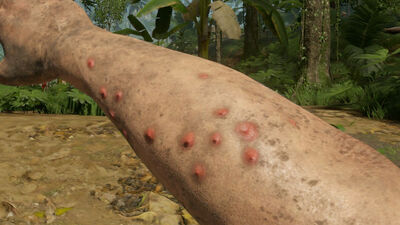 A rash is a area of skin that has become irritated, causing small red bumps on the player skin. Having a rash is usually not fatal, however it will temporarily reduces the players sanity as long as the rash persists.

When the player first receives a rash they will yell and itch the affected areas. The inspect icon will also be displayed above the health meter on the left side of the screen.

You can get a rash when coming into contact with aggressive insects such as the Brazilian wasp and ants.

The Rash will naturally heal over time.

To speed up the healing process it's recommended to place a bandage with antihistaminic properties such as an Lily Dressing or Honey Dressing to the affected area.