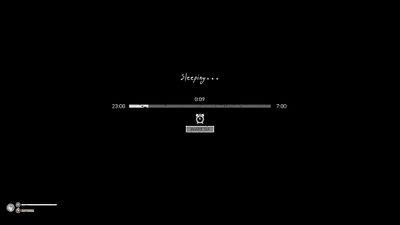 Sleeping is a game mechanic that allows the player to restore energy and progress time faster.

Sleeping restores the player energy levels and speeds time up by 8 in-game hours. In some cases sleeping can be used to regenerate the players health, low doses of food poisoning and fever can be slept through speeding up the players recovery time.

If no bed is available to the player they can sleep on the ground by pressing C and selecting the sleeping icon from the radial menu. This will however will give the player a uncomfortable sleep with a small sanity penalty. Sleeping on the ground also greatly increases the risk of worms.

Staying awake for long periods of time will cause insomnia and affect the player energy. Energy can be restored by eating, however the players energy loss will be at a faster rate then normal.

The following objects can be found at various locations around the map. They allow the player to sleep but can not be collected as blueprints or crafted.