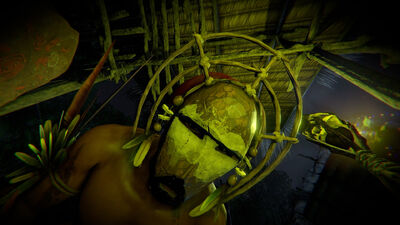 Spirits of Amazonia is a game mode in Green Hell, which is available in both the single player and multiplayer menus.

The spirits of Amazonia game mode is the prequel leading up to the events in main story. It is recommend for players who have already finished story mode. 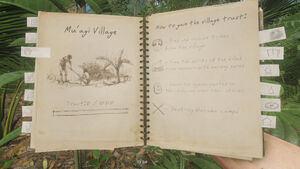 Trust points earned can be viewed in the third tab of the player notebook. Here the player can see the quests they need to complete and the overall total of trust points they have gained. Trust points can be gained before talking to the elder, however the player will not be able to view the trust page until they have found and spoken to the Mu'agi masked elder.

Below is the list of quests given to the player by the masked elder. These do not have a time limit and can be completed in any order.

Task: Find and rescue tribes from the village
The player will need to find and rescue or help Mu'agi tribal members who have fallen victim to the Waraha Tribe. This quest will require the player to complete several tasks.
For a more in depth guide on these task see the links below;

Task: Free the spirits of the killed tribe members with burning pyres
The player will need to locate and lay to rest Mu'agi tribal members who have been killed by the Waraha Tribe. This will involve making and burning the body on a prye.
For a more in depth guide on this quest see Freeing The Spirits ( = 20 Points earned).

Task: Learn the legends painted on the rocks and solve their stories
There are four legends to solve, these can be viewed in the second tab of the notebook. Upon finding and reading a Tribal Legend Stone, it will unlock the clue under it's relevant legend page. Once all clues have been found the player will be required to solve the individual legend, this will involve completing a task. After the legend task has been finished, they player will need to speak to the Mu'agi Elder to finalize the quest.

Task: Destroy Waraha camps
In this quest the player will need to find all the settlements of the Waraha Tribe. In each camp the player will find natives which they will need to combat. Once the natives have been dealt with, the player can then proceed to the destroying the camp. This will involve knocking down all tribal buildings and tribal totems. Please note you don't need to destroy any pre-existing structures such as the weapons rack.